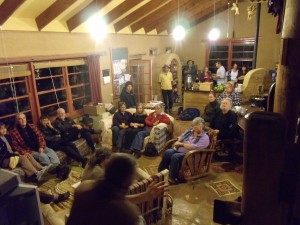 Gathered in the beautiful mud brick home of John & Sharron Champagne, Robert speaks to the TT group about food security

After a request to take the Food Connect roadshow south of the border, we spent two weeks travelling NSW to see what was happening in local transition initiatives down there.  Our first stop was Sydney and after a couple of nights speaking at Permaculture North Sydney and Chippendale Sustainability group, we met with Russ Grayson and a bunch of Sydney-siders at the Fair Trade Cafe to talk about Transition Sydney.  They’ve only just begun, and we had a wonderful conversation with the group about the important aspects of forming a core group and supporting each other along the way.

We also travelled south to the spectacular Sapphire Coast – the Bega valley and its surrounds. While there, we stayed with John & Sharron Champagne, two key leaders in the Transition Town movement.  These guys really walk the talk – living sustainably on a plot of land north of Bega. John built the mud brick home, the very productive permaculture garden and the fantastic cob oven.  He invited around thirty locals to share cob oven pizza and hear what we were up to in Brisbane and we learned heaps from them too.

The Sapphire Coast is already well known for its fantastic initiatives in local energy and food producer groups. Some of the more recent initiatives of TT South East NSW include:

It was a great and inspiring visit to Bega and we want to thank John, Sharron and the rest of the TT mob for hosting a great night for us.  See you all soon at the next Hub meeting!

One Response to Rosey Pekin TT Adventures in NSW